The U.S. Virgin Islands was just named the Destination of the Year in the Caribbean Journal Caribbean Travel Awards 2021!

For anyone planning to travel to St. Croix in the coming month, be sure to visit the USVI COVID-19 Travel Screening Portal. This will give you all the information you need to travel to the U.S. Virgin Islands. American Airlines recently started offering at-home testing through LetsGetChecked. We look forward to seeing you and would be happy to schedule a COVID-safe home showing if you’re in the market for St. Croix real estate!

This Fall, Governor Bryan announced his USVI Vision 2040 economic development strategy. Vision 2040 is an interactive, participatory process to produce a long-term economic strategy and action plan that positions the U.S. Virgin Islands as a vibrant, desirable place to live, work, and visit, and as a prosperous business location that is competitive based on its abilities to develop, retain, and attract a skilled workforce with creativity and imagination. There are many opportunities to share your ideas, priorities, and concerns for the future economy of the U.S. Virgin Islands, so be sure to participate in a virtual open house or submit comments.

In September, our own Stephen Swanton received the Good Neighbor Award from the St. Croix Board of Realtors. Stephen was recognized for his work with Virgin Islands Triathlon Federation. He was awarded $1,000 to support VITF’s mission and Coldwell Banker Schmidt Family of Companies matched the donation through their Schmidt Community Fund. As many of your know, Stephen exhibits the same focus and eye toward success in real estate as he does in competition. Team Fedeles is lucky to have him on board! Learn more about the Good Neighbor Award and Stephen’s work with VITF.

As a member of Ha’Penny Bay Beach Club, I’m excited to share our holiday offering of a one-year membership for half price! Become a member of The Club for $650 per person and no initiation fee. Club benefits include monthly lunches, dinners and brunches, use of The Club for private events, holiday and special events, use of the facilities when visiting Ha’Penny Beach, and more. Of course, for now activities and events are somewhat limited due to COVID; however, our open-air dining room is the perfect place to spend socially distanced time with new and old friends!

The St. Croix real estate market is very active right now. Congratulations to our Sellers of Romney Point and Meggie Hill! If you have been on the fence about listing, now is the time! In fact, according to the latest Market Watch, houses sold for 28% more and condos sold for 25% more as compared to the same period last year. Contact info@fedeles.com for an assessment of your property and to discuss how we can assist, whether to sell or to buy…it is a great time on both accounts!

Wishing you many joys this holiday season and a prosperous 2021!

If there’s one thing Virgin Islanders prove time and time again: we’re a resilient bunch. While COVID-19 is a new type of challenge, our community is responding in the only way we know how. With resilience.

Like most of the U.S., the U.S.V.I. is under a stay-at-home order through April 30. Our beaches were temporarily closed for the safety of all residents and re-opened on Monday, April 20. Only “essential” businesses are open with adjusted/limited hours and extra safety precautions. Many restaurants have responded with carryout ordering and grocery stores have impressively taken the situation in stride. No shortage of toilet paper here! See below for links to various resources.

Thankfully, real estate has been deemed an “essential” business and our clients who had been excitedly waiting to close have been able to do so. In fact, we’ve had one buyer and two sellers close in April — Congratulations to all!

Here’s how we are adapting our showings to keep sellers and prospective buyers safe:

We’re also capable of preparing a 100% virtual listing presentation, and we use Google Hangouts and DocuSign for meetings and paperwork.

We urge you to continue supporting these businesses and restaurants as you are able. If you’re not local to order carryout, consider purchasing a gift card for a restaurant or excursion for your next visit. Send a gift from a St. Croix shop. Write a review on your favorite business’s Facebook page.

Stay safe and healthy, wherever you are!

One of my favorite songs this time of year is I’ll Be Home for Christmas by Bing Crosby.

This time of year, we enjoy welcoming our snowbird friends “home” for the season, as well as new and long-time visitors. Like clockwork, folks arrive to escape the cold or for their favorite holiday festivities, like the Christmas Boat Parade (view our photo gallery) and Coquito Festival. The St. George Village Botanical Garden hosts their traditional Under the Mistletoe tree auction fundraiser and Christmas Spoken Here, which is a wonderful day to shop for gifts from local artisans and vendors.

Maybe you’re looking for more of an island-themed jingle. This year’s Crucian Christmas Festival will honor Stanley and The Ten Sleepless Knights for 50 years of music! There will even be a Carnival village named “Stanleyville,” according to the St. Croix Source. TSK holiday favorites include Mama Make Your Johnny Cake and Guavaberry.

The USVI Festivals Facebook page can help you plan your Crucian Christmas Festival experience. We found this handy calendar of events that says the date when each activity will take place.

As we look toward the start of a new year (and decade!), big things are happening on St. Croix. Limetree Bay hosted a community open house in November to share information about the refinery restart. I shared a row on a recent flight with two gentlemen who were on island to help secure the pipeline and it sounded like all was going according to plan. You can learn more about the effort in this article, Restart of idled St. Croix oil refinery set for early 2020 after delay.

Finally, if you’ve ever enjoyed a sunset from St. Croix, we think you’ll agree with #1 from this list of 20 Destinations With The Most Stunning Sunsets. “St. Croix in the U.S. Virgin Islands is a special place for many people. Yet, it is not as big of a tourist destination as some of the other areas on our list. However, it is one of the most naturally beautiful and affordable places you can visit.” And, we might add, to live!

No matter your playlist this holiday, may there be plenty of presents under the tree and the love light gleam all around you. And if you’re ready to replace snow with sand, we can help you find the home of your dreams on St. Croix!

Our stunning listing, Meggie Hill, is on the cover of the 2019 Coldwell Banker St. Croix Realty Magazine. Even if you’re not in the market for real estate, you’ll enjoy flipping through the pages of the 154-page publication showcasing Coldwell Banker listed homes and property for sale on St. Croix.

With hurricane season upon us, this Forbes article, Does Hurricane Damage Negatively Impact Your Real Estate Value?, is quite timely. The article references last year’s intense season and offers the prediction that 2018 is in for 14 named storms, six hurricanes, and two major hurricanes. Of course, the territory that those predictions covers is vast and it’s unknown where any potential storms may make landfall. But, how does a hurricane affect real estate property values in areas hit by hurricanes?

Reports show that hurricane damages actually cause housing market prices to go up. Therefore, as a real estate investor, you should be inclined to invest in properties that surround the Atlantic Ocean due to this positive impact from these natural disasters.”

According to the article, The Federal Reserve Bank of Dallas reports that a “typical hurricane strike raises house prices for a number of years, with a maximum effect of between 3 to 4% three years after occurrences.”

The St. Croix real estate market was right on target with Forbes’ assessment that real estate sales take a short-term plunge after a hurricane. “…reports show that home sales happen less frequent and at a lower cost immediately after a storm.” Naturally, homeowners are doing the necessary post-storm tasks, like assessing damage, making repairs, and cleaning up. Once recovery is in full swing, we have seen an increase in median prices and decrease in the median time on the market. This year, we saw an uptick in real estate about 4-6 months after hurricanes Irma and Maria.

The article also mentions rentals, which have been in high demand due to recovery efforts. Post-storm has proven to be a prime time to own a rental property on St. Croix.

Cruzan Rum may call St. Croix “The Don’t Hurry” island, but time sure is flying. It’s hard to believe we’re almost halfway through 2017! So far, the year has been full of milestones.

The new ferry between St. Croix and St. Thomas started service in early April. The ferry makes two round-trips, seven days a week, and a one-way trip costs $50. Though it has had a few challenges, reviews have been mostly positive.

Speaking of hurrying, more than 300 athletes were moving as fast as they could toward the finish line of the Ironman 70.3 St. Croix triathlon. May 7 was the final running of the race that started as the America’s Paradise Triathlon in 1988 and became the Ironman 70.3 St. Croix in 2001. The Ironman franchise has grown from 10 races to more than 200 worldwide, which has led to declining participation here on St. Croix. We’re sad to see it come to an end, but have heard several supporters talk about ways to keep the triathlon going.

The USVI Department of Tourism has upped the ante with a Centennial Plus Package to incentivize tourism to St. Croix, St. Thomas and St. John. In partnership with travel booking services, book before June 1 to receive $400 in VI spending credits plus get a fourth night free! 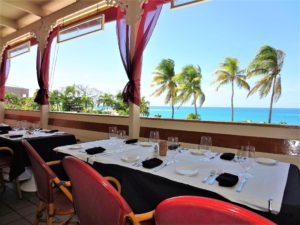 As you may see periodically on my Facebook page, restaurants on St. Croix have been getting quite a bit of attention lately — and now you have two opportunities to own prominent St. Croix commercial properties that are currently restaurants. An island favorite, the Cultured Pelican is located at Coakley Bay condos, overlooking Buck Island. Gertrude’s is in a high-traffic location with expansive space for restaurant seating or a number of different commercial uses.

Have you ever wondered what the “Beachfront Bargain Hunt” couples are up to post-television stardom? I stopped in on Kyle and Ania earlier this month to say “hello” and see what they’ve been up to. They bought their house last summer and have been busy with some major renovations to turn their investment into their dream home.

Are you ready to buy or sell your island home? Home sales are up on St. Croix. The Market Watch shows that 25% more homes were sold during April 2017 compared to April of last year. Give Kristi and I a call!

Would you like to learn more about a property you see or are you considering listing your property? We can help!

David Fedeles is a licensed real estate broker in both St. Croix USVI and New York. If you are looking for your dream home in America’s Paradise, David is ready to work with you!